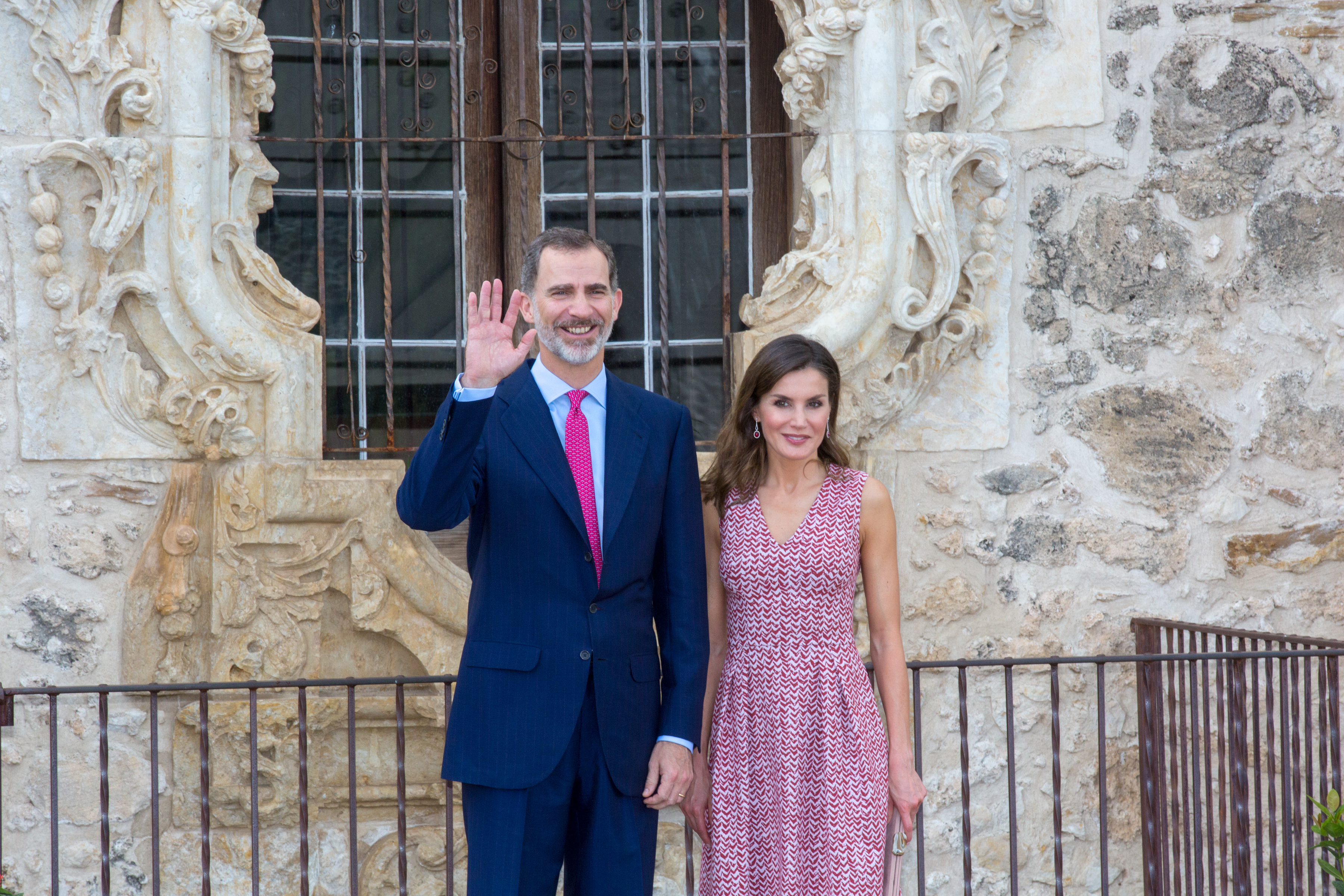 72 hours with Their Majesties the King and Queen of Spain

It’s a cold January night – and I’m holding up a glass of champagne ready to bring in the New Year with my family in Spain. Out the window, the city lights of Barcelona shine brightly as the city prepares to come alive well past midnight.

This is my first time ever retracing my roots in la “tierruca,” traveling to Asturias in the North of Spain and ending my trip in Barcelona – two places where I have family. Cider and tapas aside, I leave refreshed and feeling connected to a culture and people I only ever heard of through stories told by my mother. Fast forward five months, and I’m in Texas standing in line to shake The King and Queen of Spain’s hands as they visit San Antonio for the City’s Tricentennial.

I used to work as a reporter for a local news site in San Antonio called the Rivard Report, but I decided to leave that life behind to go home to Mexico and be with my family for a few months. Part of that three-month break included a month-long trip to Europe, where I was able to meet members of my mom’s side of the family in Spain for the first time in my life. While I reflected during my European adventure, I realized just how special San Antonio really was – its people, its neighborhoods, and its newly-elected progressive mayor – so I decided to return and continue building my career in a city on the rise.

As fate would have it, I stumbled upon an opportunity in the City’s International Relations Office. I knew full well that the City was celebrating its Tricentennial year and that my involvement in the celebrations and helping plan for special high-level guests would be more than worth it and a once in a lifetime opportunity.

I took the opportunity and said, “Let’s go with this.” More than 100 dignitaries from San Antonio’s sister cities and other relationships came to visit San Antonio from May 1-6 for the City’s Commemorative Week, meant to celebrate the San Antonio’s founding 300 years ago. We later got confirmation from the Spanish Royal Household that the King and Queen of Spain had accepted the City and County’s invitation to attend our Tricentennial celebrations.

I soon realized that I would be a part of the team that would help plan and coordinate a royal visit for the 7thlargest city in the United States. The last time San Antonio had a visit from the Spanish Royal household was back in 1987, when Their Majesties King Juan Carlos I and Queen Sofia visited the city and met with Mayor Henry Cisneros.

This historic visit for San Antonio’s Tricentennial took years in the making, ever since then-Mayor Ivy Taylor sent the first correspondence across the Atlantic. For San Antonio, this became an opportunity to re-engage with Spain and to strengthen cultural, educational and economic exchanges. Their Majesties, King Felipe VI and Queen Letizia, arrived in San Antonio on June 16 and departed on June 18. Their visit included the following important historical sites of the city and started like this: The official welcome ceremony took place on June 17 at the Spanish Governor’s Palace, which showcases the last visual remnants of the Presidio San Antonio de Bejar, a Spanish fort founded on May 5, 1718 along San Pedro Creek. It wasn’t until 1731, upon the arrival of Canary Island families, that a municipality was formed. At the request of the King of Spain, scores of Canary Islanders sailed to America in 1730 to populate the region, becoming the pioneers who shaped San Antonio.

“This region was the birthplace of a unique culture whose influence has spread far beyond the limits of that small settlement in the Spanish Frontier,” Mayor Ron Nirenberg told the audience during the official welcome ceremony. “To this day, our city’s layout, urban fabric, and architecture continue to be defined by those first plans laid out by the Spanish Crown.” San Antonio’s Spanish-Colonial Missions, Nirenberg added, were inscribed as the only UNESCO World Heritage Site in Texas in 2015. These important landmarks, which have catapulted the city on the world stage, were founded by Franciscan missionaries who were backed by the Spanish Monarchy and government.

A Tricentennial plaque was dedicated in honor of the King and Queen at the Spanish Governor’s Palace, and Mayor Nirenberg gave them the keys to La Villita. After the welcome ceremony, Their Majesties had the opportunity to tour Mission San José, accompanied by Archbishop Gustavo Garcia-Siller and San Antonio Missions National Park Superintendent Mardi Arce. The Mayor told the San Antonio Express-Newsthat this part of their visit was “the most impactful” for the royal couple “in terms of reminders of how deep our connections are.”

After they walked the Mission grounds, the royal couple headed to the Magik Children’s Theatre at Hemisfair Park to meet Spanish Artist Daniel Muñoz and view his mural work on the walls of the Theatre, which was commissioned by Public Art San Antonio. District 1 Councilman Roberto Treviño and San Antonio Arts and Culture Director Debbie Racca-Sittre explained Their Majesties about the city’s efforts to support more public art projects for all residents to enjoy. Photo: Courtesy of the City of San Antonio

The royal couple’s evening ended with an official dinner at the Pearl Stable, where more than 200 guests, including elected officials, city and county leaders, and various heads of local civic and business organizations, had an opportunity to taste dishes prepared by three of San Antonio’s local star chefs in celebration of San Antonio’s recent UNESCO designation as a City of Gastronomy.

Chef Steve McHugh, who leads restaurant Cured, cooked a pan seared redfish with blue crab, summer corn, and caviar. His dessert was a Texas mesquite cake with horchata ice cream. The chefs all researched and used ingredients known to be used by indigenous people for hundreds of years, as well as spices and ingredients introduced by Canary Island settlers. San Antonio’s culinary heritage is significant for its confluence of many world cultures such as Mexican, Spanish, German and French, as well its geology and geography.

“San Antonio speaks for itself, and much of its charm is in the way it embodies its past,” His Majesty King Felipe said during his speech at the Pearl. “…San Antonio is indeed a welcoming and generous city to all those hoping for a better future.”

During their three-day visit, Their Majesties also had an opportunity to inaugurate two art exhibitions on June 17, they visited the Bexar County Courthouse to view Designing America: Spain’s Imprint in the U.S., an interactive exhibit that takes a look at Spain’s architectural and urban cultural legacy in the United States. The exhibition was created and organized by the Fundación Consejo España-Estados Unidos. The following day, they were hosted by San Antonio Museum of Art Director Katie Luber and were led through Spain: 500 Years of Spanish Painting from the Museums of Madrid, which traces five centuries of Spanish painting, with many works traveling to the United States for the first time. Ignacio Zuloaga, Joaquín Sorolla y Bastida, Francisco de Zurbarán and Francisco de Goya are some of the painters in this historic exhibition.

“The purpose of these celebrations are to evoke the legacy of our cultural heritage, highlight the fraternal thread that unites us, and highlight the example of plurality and coexistence which this city has become,” King Felipe said the final day of his visit at luncheon held by the Fundación Carolina for its sixth convention of Líderes Hispanos de los Estados Unidos (Hispanic Leaders of the United States). During this event, The King of Spain praised the U.S. Hispanic communities for their “spirit of work and improvement,” and called them an “inspiration to the new generations and a model of social innovation.”

For San Antonio, the Royal Visit by the King and Queen of Spain was a chance to show the city’s progress as a 21stcentury city that honors its past in order to plan for the future.

For me, getting the chance to talk to the Queen before the official dinner, and bonding for a few brief seconds about both of our personal connections to Asturias, Spain, brought me back to the snow-capped mountains in northern coast of Spain and the splashy waves hitting rocks in Cantabria.

Who would have thought that a after discovering Spain for the first time and traveling to retrace my roots, I would end up meeting the King and Queen of Spain a few months later in San Antonio, Texas. It was a once in a lifetime opportunity I will never forget – a story I will tell my own children when they ask me if I’ve ever met Royalty. I’ve got quite a story to tell them!

Disclosure: The opinions expressed in this commentary belong to the author and not to any other entities mentioned in the narrative.