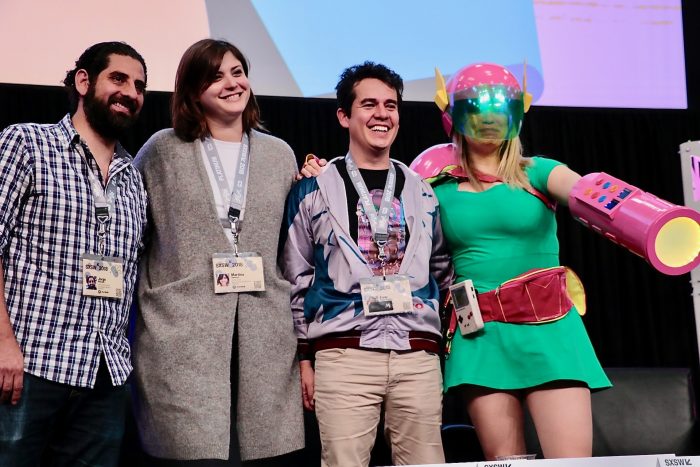 When the city of Austin finds itself deserted by its college and high school students due to Spring Break vacation, it undergoes an evolution – like the characters in the game of Pokemon –almost immediately becoming swamped by a wave of visitors who come to enjoy one of the most nationally and internationally recognized festivals of the last 30 years: South by Southwest, or SXSW as its commonly referred to, which causes the city to vibrate, literally, for the next ten days as it never does the rest of the year.

Downtown Austin is flooded by a tide of tourists from around the world who come to SXSW to participate in a number of activities mainly in the film, music, and the technology industries and to enjoy the best weather of the year in Austin, late Winter just before Spring. On the streets, you can hear conversations in every language imaginable, such as German, Danish, Swedish, French, Portuguese, Norwegian, Japanese, Chinese, Korean and Spanish.

This year, I was struck by a group of musicians having conversations in Estonian, a Finnish-Ugria language spoken by people living in Estonia. All of them made this pilgrimage from the Baltic Sea region to ATX with the hope of celebrating and experiencing the new in all the areas of creative activity offered at SXSW, whether music, film or tech. This year, for the first time, an effort was made to bring representatives from the emerging video game industry in Latin America to SXSW. This magazine La Revista Mujer organized a panel of invited representatives from the best videogame studios in México, Argentina, Colombia and Brazil. This panel was called “Emerging Visions: Video Game Studios in Latin America”, and opened the festival with a lot of energy and captured the attention of NBC News as well as NPR, who interviewed the panelists as well as La Revista Mujer.

The Spanish Language and Video Games

The panelists expressed themselves about the challenges they have had to overcome, in order to create their videogames successfully: one of them being the importance of the Spanish language when designing a game and how it changes the dynamics of the game when translated into another language. Martina Santorio, CEO and founder of Okam Studios from –as she described it humorously– “the end of the world that is Buenos Aires”, commented that

– unfortunately “commonly in these situations we use the Spanish of CNN, a Spanish that everyone understands but no one speaks”.

The contribution of women in the industry was an important topic discussed during the presentation. Jorge Morales, CEO and founder of Larva Studios de Guadalajara said that his studio has nearly a 63% female staff. In fact, the general director of video, art and animation in the Larva studio is a woman. This is the result of Jorge’s efforts to organize events at universities to invite and motivate women from the technology-related degrees and offer employment in this industry.

“Women bring a new perspective to the game. Mexico is living in a visual era in which it is first rate, just as outstanding as Guillermo del Toro is in the cinema, says Jorge. And he adds, “del Toro himself is developing a video game of his own as well as holding Master Classes on these videogames open to the public in Guadalajara”. ANA RIBEIRO, who once carried the Olympic torch in 2016 Brazil Olympics, is the Creative Director of the virtual reality video game studio Arvore. She comes from the north eastern region of Brazil, the “sertao”, a province cover in brush combined with beautiful beaches, but all in all a very poor region. As a girl, she knew no one who designed video games, nor someone that actually played those games, because “nobody even had a television”, Ana said.

However, although the industry has increased dramatically, a financial effort t is still needed to play a videogame. The price ranges between 100 and 400 dollars, sometimes up to 1,000. “The great thing though about Brazil, is that we don’t give up when faced with obstacles. We look for ways around them, that is the Brazilian way”.

Cultural identity and the games

Cultural identity is important when developing new games. “We have games called “Tarahumara”, “Palenque”, and other games involving Mexican wrestling. But Mexican wrestling is not experienced in the same manner in Colombia for example. People should realize that all countries south of the border are not the same as Tijuana, our countries and cultures are very different”, said Jorge Morales.

Jorge also noted that his studio’s workload is approximately 80% assigned from the U.S. and Europe. “They know we can do it, and it’s the same quality as you would find there”. The remaining 20% is Mexico centered, “projects of our own” as he puts it.  “You cannot create a game with a strong cultural front because, depending upon the specific country, not everyone in Latin America would understand it,” says Eivar Rojas, CEO and founder of Efecto Studios in Colombia.

“The cultural question does play an important role, but we refer it only slightly when developing a game and we have been successful with that approach”. Regarding the future of this industry  MARTINA SANTORO, CEO and founder of Okam Studios and  president of the Association of Videogames of Argentina.expresses: “Nowadays, more than ever, there is great accessibility and support on the Internet to create videogames on any platform. The Videogames Association of Latin America is about to become active in fostering this industry in all of the Latin American countries. All of us here on the panel already work together regularly, despite working and living in different countries. We are always in contact with ideas and dealing with problems”. Videogames and animation are one of the six industries of MICSUR, the Market of Cultural Industries of the South.

VIDEOGAMES ARE HERE TO STAY

Everyone is aware that videogames are here to stay, and in Latin America , we are prepared to grow and increase in strength, becoming a new means of expression with a path to the future.

As Martina described the state of videogame development “It’s like in the old days of cinema. You had to go to the circus, put a coin in a nickelodeon and turn the crank to watch a primitive silent movie. Now look at what the cinema has done! Well, videogames are at the silent movie stage right now, you can only imagine where we will be in the future with virtual reality for instance and that is perhaps only the beginning”. LRM

5 PRODUCTS FOR A NATRUAL LOOK FOR ...

ONE HONEST STICH AT THE TIME