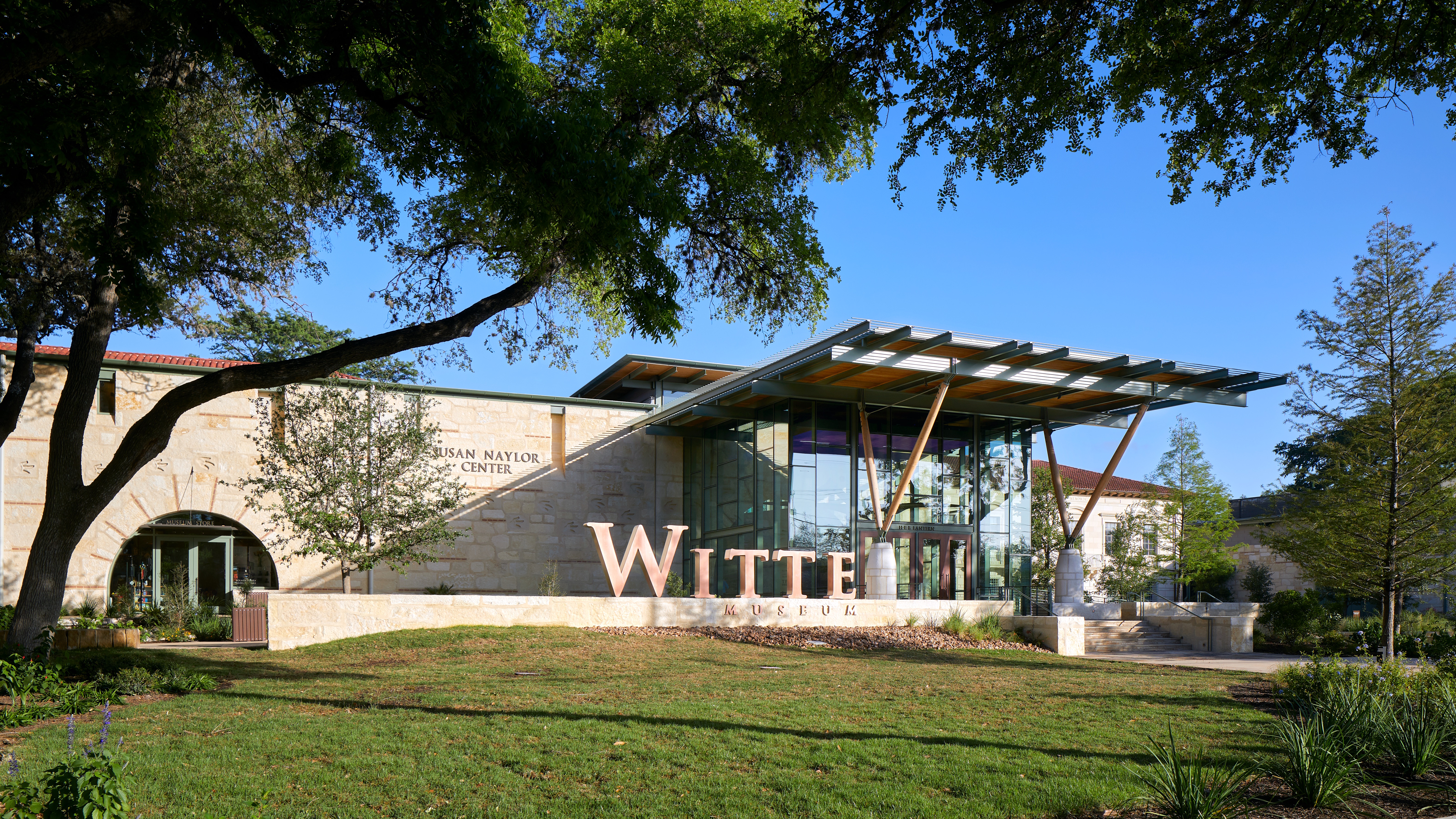 Dinosaurs were present in this part of Texas more than 70 million years ago. Water levels, fossils and paleontology studies show this to be the case, San Antonio being then part of an immense river delta. But how did all of this begin? Dr. Thomas Adams, the museum’s curator of Paleontology and Geology explained the importance of millions of years in paleontology studies, (or detective work, as he calls it!) fossils, water level and why female dinosaurs are hard to identify. His enthusiasm for paleontology is contagious.

As we enter the Witte Museum, a life size Quetzalcoatlus, flying  in circles over the ceiling, vaguely menacing and altogether impressive welcomed us during a Tricentennial Celebration visit. “It’s our new mascot”, our museum guide Katye Brought, Cta, Director of Communications declares, “we call him Quetzi” she  says with a laugh.

Next, we find a 40-foot long Dinosaur skeleton, casted footprints from the area and the animals that once roamed this landscape.You have just stepped into, by common agreement, one of the best museums in the country, and  here in San Antonio. The Dinosaur exhibit at the Witte to me is the best I’ve ever seen in its layout and setting.  How did that come about?  How was it planned?

ADAMS: Well, I was brought in to help design the gallery. The Witte museum always focuses not only on South Texas but all of Texas, to make you understand where you are.

How did the dinosaur fossilized bones come into the Museum’s hands?

ADAMS: In general, most of all fossils in the collection are donated. Specifically, since I started here 5 years ago, I am the first Paleontologist of the Museum and I am developing a program with several research projects so that in the future we have our own collection of materials.

Most people think, I think, that the age of dinosaurs was one million B.C. so it’s staggering to realize in the museum that there were different ages of dinosaurs, going back 58 million years ago. What book or books would you recommend to the general public including myself to become more informed about the age or ages of dinosaurs?

ADAMS: First, let me correct that number 58 million should be more like 228 million years, as the oldest fossil from Texas. During that time not all Texas was populated by Dinosaurs, because there were periods with no fossil record. Periods of time where there was no rocks and sometimes we can’t base on the rocks the geologic history in Texas, but it is very, very long.There are good records available. As for Dinosaur books, I would recommend a really good book written by a friend of mine called “The Most Complete, Up-to-Date Encyclopedia for Dinosaur Lovers of All Ages” by Dr. Thomas R. Holtz Jr. DINO TRACKS IN THE HILL COUNTRY

Regarding dinosaur tracks, in Government Canyon near San Antonio, and the Sauroposieden tracks in the Blanco River, and Sauropods being river delta creatures from what I have read, have made me realize that most of South Texas and Northern Mexico must have been undersea in those times. But nevertheless, by chance have any tracks or trackways been found further south of San Antonio or in the Monterrey, Mexico area?

ADAMS: No, so far San Antonio is as far south as we have found them. I have looked myself, and I don’t expect there to be any. I wish there were some, it would change the whole concept of thinking about paleontology in the region though.

If we follow Dinosaurs tracks in the 24 different counties in Texas, if you map it out, it basically follows the shape of the Hill Country, like an “L” shape. This is because of the geology, the water, and all was just right for it. We have more dinosaur fossils concentrated in this area, than any other area in the world. Let’s say we are very fortunate. Have you found any tracks of female dinosaurs?

ADAMS: With tracks is difficult to get gender. There is only one dino in Texas called Agujaceratops (Horned face from Aguja) from the Late Cretaceous of West Texas, (found in Big Bend National Park 1938) that lived 83.5 million years ago with enough fossils to show that there are two different patterns in the shape of the head, with that the assumption that there is a male and a female, but cannot state and be 100% certain that it was a female dino. It’s hard to prove. Just as in many other animals there is no bone in the body that can tell you if there is female or male dinosaur, as opposed to the humans, who can be identified by the hip bones.

300 SA Woman Fact:  Did you know that a woman named Mary Anning discovered the first ichthyosaur skeleton correctly identified, and two plesiosaur skeletons, among many other important discoveries?

What do you want a visitor to take with him/her when he/she leaves the Museum?

ADAMS: What we want visitors to take with them is an understanding of what’s going on here.That Texas did not always look as it is today. Animals change as sea level is starting to rise. Animals and vegetation respond to that. There is a perfect title for that in one of our spaces here: The Dance between Land and Sea.

What can we expect in the near future?

ADAMS: In paleontology we still discover new things all the time, a lot of research projects are ongoing in Texas. At the end of the tour, you realize that 300 years in San Antonio is barely the blink of an eye when considering the vast span of 228 million years as the oldest fossil in Texas is. Go and visit when you can, it’s important to know how it all began.

EXHIBITIONS THIS SUMMER THAT YOU CAN’T MISS!

300 SA Woman Fact: Did you know that a woman, Marise McDermott, president and CEO of the Witte Museum, was in charge of recently presided over the USD $100 million expansion and renovation of the campus?