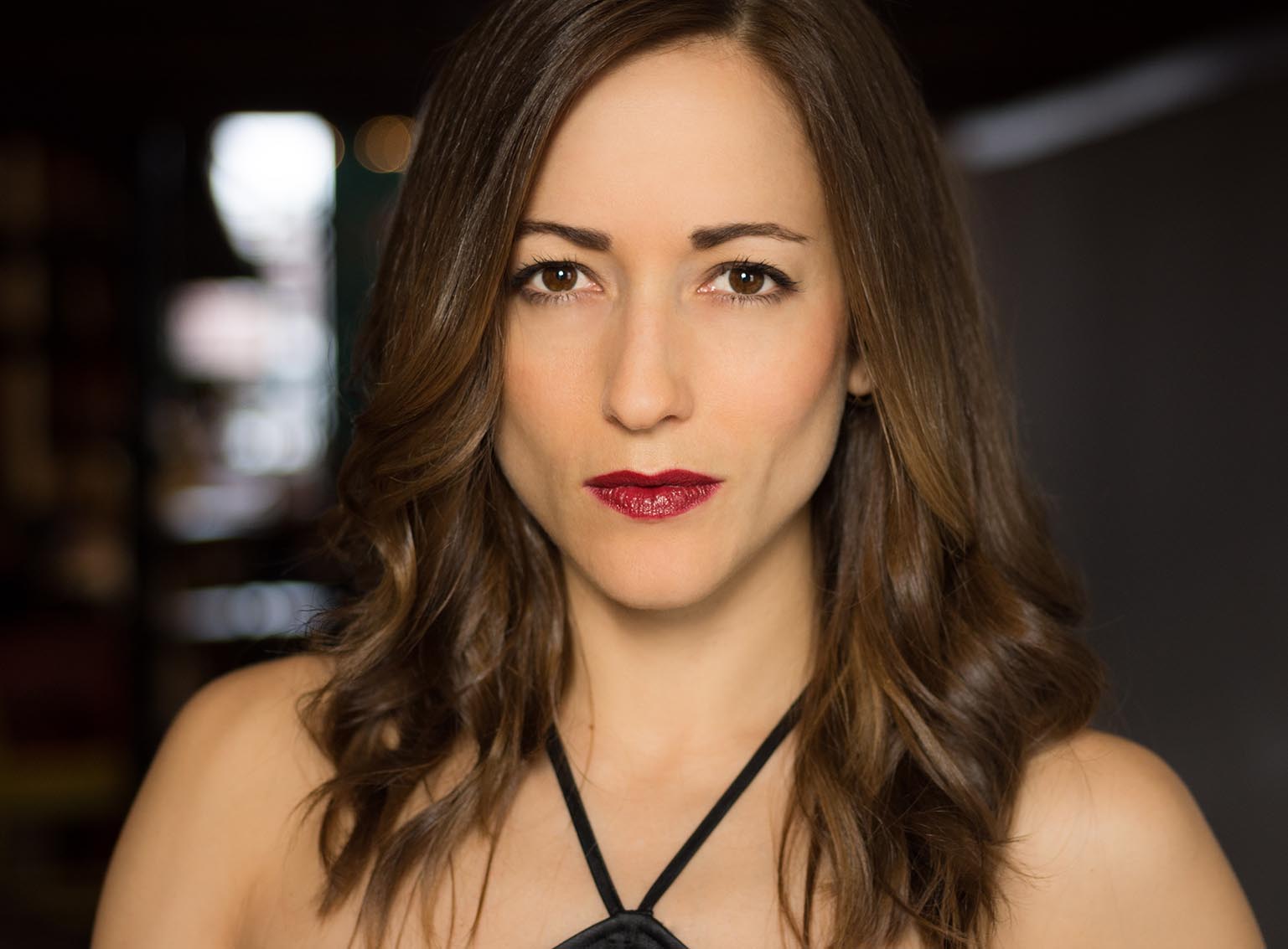 Carolina Ravassa possesses energy, personality and a surplus of talent as an actress whom breaks with the Latina stereotype not only with a voice that gives life to the character of Sombra, the first Mexican heroine in Overwatch, the most successful video game of 2016, played by millions of players all over the world; but also the voice of Hispanglosaxon, her own web series where she deals and devastates the stereotypes that still exist regarding Latina actresses in New York.

She has acted in the TV series “The Affair”, awarded a Golden Globe in 2015, for the best television drama. Carolina was a special guest of La Revista Mujer at its very first panel at the SXSW Gaming Festival of 2017: Boop! Women Online: Female Voices in Video Games, and we were able to discover for ourselves why she is beloved by her fans. This summer project she has been nominated for the IMAGEN Awards 2017.

But, who is Sombra?

According to her fictional biography found in the Overwatch video game produced by Blizzard Entertainment, she comes from a violent past in Mexico, from a town called El Dorado. She survived a war where she lost everything.

As a child, Sombra grew up in very poor circumstances and began to manipulate information to get what she needed in order to survive. Besides not being always a noble character unafraid from now and then shady dealings, she is shrewd, her ability as a hacker is unmatched. That struggling young girl later becomes Sombra.

How was your experience during the casting sessions for Sombra’s character?

I had no idea how important Sombra’s character was in the community of game players and how successful it has been. It was very competitive and they wanted a person with a Latin accent in English, which was easy for me because I do imitations of many Latin-American accents.

When did you arrive in the United States?

I was born in Cali, Colombia, but my grandmother was American and I used to practice English with her and my mother. In the summers I visited my aunts in the United States and that also helped me.

Since I loved to play all types of characters when I was a child; I sang and danced, especially Salsa. I decided to study acting in Boston College and in this way I came to the United States in a permanent manner. Here I prepared myself at the New York Conservatory for Dramatic Art, New York being where I currently live.

Being Colombian, was it difficult for you to make Mexican accents?

No, not really, the truth is that they never asked me where I was from, I simply auditioned in Spanish with what they provided me. I confess that I was afraid that someone would say, “she‘s Colombian, we can’t use her”.

The funny thing is that later on they told me that they already knew I was Colombian and they had seen my Web series Hipanglosaxon. All those worries for nothing (laughter). And that was precisely one of the things they liked about me when choosing me, because they wanted a person that did a variety of things, not only being a voice actress.

Because it is not a stereotype – although she has a stereotypical but comic accent. Sombra’s character is complex, she has a tumultuous and mysterious past. Besides when you think of a world famous hacker you don’t always think of someone from Mexico, and much less the hacker being a woman. I also love her ability to make herself invisible and to hack everything and everyone! – like super mega hacking.

What does the Boop!’ expression that Sombra uses means?

It is like a reference in the game to express an attitude of challenge, like “we’ll see how you do, if you don’t do this”. This expression has become a polemic among the fans. One of them wrote that it was a type of infiltration. Boop!’ expression is made by touching the nose of others with her index finger.

Who or what inspires you to do so many accents and voices?

As a child I used to watch a lot of Robin Williams and I was impressed by all the voices that he could imitate. He was incredible! I didn’t realize how much he influenced me until I started thinking about that after he passed away.

Cate Blanchett also inspires me because she is an actress of many nuances and I am impressed by how well she performs them. I also lived in Spain, Italy and Brazil where I worked in the Theater of the Oppressed with prisoners in jails, creating the stories that they wanted to create, in order to make a positive change in their lives. So I can also act in Italian and Portuguese.

Do you like being a voice actress or movie actress?

I like performing as a voice actress because it is a challenge to be able to deliver clear and credible lines in order to bring a character to life. In Sombra, we have four hour sessions and although they don’t see my body, they only hear my voice.

However, I also do movements such as when I am running and jumping – dodging the enemy! But I prefer being a movie or television actress because you utilize your body as a tool to express your feelings, not only your voice.

Although the video game is in English, the writers of the game, under the supervision of Michael Chu, the lead writer, hired experts from Mexico City to advise them and provide veracity to the Mexican phrases.

My favorite phrases are several: “Apagando las luces”, (Lights out) “Qué onda”, (What’s up)  “Me agarraste en curva” (You threw me a curve). The one I like the most is bilingual: ¨Relájate, I´m not going to kill you .¨ (Relax, I am not going to kill you) – I believe that explains Sombra’s humor!

Carolina, you also produced a successful one-woman sketch comedy web series: Life as a White Latina in New York, named Hispanglo-saxon, how was this project born?

Well, after many years of going to castings in New York, and being tired of confronting the cultural stereotypes that still exist regarding Latin American actresses, I decided to express all those experiences in ten chapters, in the form of comedy, which I filmed, directed and acted myself with an IPhone and many borrowed wigs!

The result: a bouquet of charming characters with different accents. Hispanglo-saxon has started its second season and you can see it at www.hispanglosaxon.com. I am very excited because it was nominated for the IMAGEN Awards 2017, and I won it!

We loved having you in La Revista Mujer’s first ever panel at SXSW Gaming Festival, what did you like regarding your participation in this event in Austin, Texas?

This is the first time I have visited Austin and I loved the experience. The city is divine, the people kind and being able to attend the SXSW events was very exciting for me. I liked being able to know Michael Chu more, the game writer of the Overwatch game, because I learned more about the process in Overwatch and every day, I understand the game more deeply.

The panel was incredible because I saw how exciting the game was for the fans, especially for girls and parents that appreciated that the game was well made and like the manner in which women are portrayed. All the questions were well thought out, it was a great success. We stayed thirty minutes over the time allowed!

What do you think about the future of video games?

I think the future of the video games is in the diversity of its characters and in the development of games where there is no violence against women and where women are not only intelligent and beautiful, but also powerful, without that being exaggerated, especially when they include a Hispanic female hero among their characters, such as Sombra.

Read more on Diversity in Video Games. Latinoamerica at SXSW Video Game Festival. and Kiki Wolf and the Halo of Success in Video Games by Lilia Davis.

What would you advise a writer that would like to create a Hispanic heroine?

To create a heroine in their story, I would advise that first they think of all the women they admire in their own families, their mother, their sisters, their aunts, or their grandmothers. That should be their starting point.

Your plans for the rest of the year?

I just returned from France and Australia this summer and I would like to continue traveling with Sombra’s character, around the world. But I am very excited because perhaps this fall I will film a movie in Italy.

Each day there are new opportunities appearing, so I have to catch them, because as Sombra says: “Camarón que se duerme, ¡Se lo lleva la corriente ”! (The shrimp that falls asleep is carried away by the tide) ¡Boop!

Carolina does not have two Chihuahua dogs, but she loves to babysit cats. She likes to eat tacos al pastor, but does not like manicures! Although she has never won a dance contest, she loves to dance Salsa! She doesn’t like coffee without milk, but she loves mole from Oaxaca and she does not speak Japanese. Carolina almost never wears high heels, and she is super punctual. Her dream for 2018: to get more work as an actress! LRM