CHRISTIAN DIOR, A QUESTION OF TULLE

This year Christian Dior proudly celebrated the strength and bravery of the Mexican woman with a collection inspired by the Escaramuzas, the female equestrian tradition in México, that was presented unforgettably outside of a castle in the beautiful region of Chantilly, France known by its famous horse racing course and chantilly lace.

Maria Grazia Chiuri, Christian Dior’s first woman designer broke with the stereotypes usually typifying Mexican women with the Escaramuzas during the fashion show for the Cruise Collection 2019 this year. An entire team of Escaramuzas was brought to Chantilly to perform a brave choreography wearing dresses exclusively designed for the performance by Dior during the presentation of that house’s  fashion show. Since her appointment as Christian Dior’s first female artistic director in July 2016, Maria Grazia Chiuri has been occupied with writing a new chapter in the history of the House of Dior using it as a platform for a specific purpose in addition to fashion. “When I arrived, I decided to think about femininity in a way that is contemporary” she admitted in an interview.

That said, now permit me to backup and explain the curious way this article came about.

I had written a letter of admiration to Christian Dior to describe how much it meant to me personally that they had made the effort to bring an entire team of women Escaramuzas  to France and celebrate them by way of Christian Dior. Here is my introductory letter, originally sent in Italian to Maria Grazia and in English, transcribed here in Spanish.

I am the editor-in-chief of La Revista Mujer, a magazine in English and Spanish that celebrates the beauty, the mind, the soul and the work of women. I am from Mexico and I grew up admiring the skill of the Mexican horse riders, during many afternoons I spend my Sunday sitting in the stands under the canvas of the charro lienzo in Reynosa, Tamaulipas,  my father being one of the founders of the Charros Association of Northern Mexico. I now live in Austin, Texas, in the United States, and I’m excited to see your 2019 collection celebrating these incredible women.

The elegance of their dresses and movements are inspiring. I would like to celebrate your work and your designs from this collection inspired by the Escaramuzas in my magazine. If you would be so kind as to get in touch with  me or have your press representative arrange for a possible interview, I would greatly appreciate it. And thank you again for celebrating our wonderful Escaramuzas. Very kindly … … Lilia Davis

When the Manager of Public Relations and International Press for Christian Dior responded to my request twenty-four hours later, I could not help but feel an enormous emotion, this being the first time that la Revista Mujer  began to correspond with a European company. In Paris, however Christian Dior first wanted to know what was la Revista Mujer?

Immediately I wrote another letter, this time longer, listing all the achievements of our magazine, the great women we celebrate and what they represent to us. Twenty four hours later, I received another answer, this time the director replied to me with a simple note, with a copy for the Christian Dior headquarters in New York. In a few lines it said: “Dear Lilia, since your magazine is based in the United States, I have taken the liberty of sending a copy of your request to our manager in New York. And right there he said to the others: “Please send to Lilia Davis all the necessary material for your article, Thank you.” And that’s how an e-mail exchange and the article that you are now reading began! One of the main characteristics in CD designs is the abundant use of tulle fabric (toile de Jouy) in their dresses. Christian Dior was criticized for using it so often during the Second World War, in the midst of the great scarcity of fabrics during that time, but his passion for female beauty insisted he spare no effort. From the waists of the models of the 40s he could easily hang 34 meters of tulle fabric delicately sewn around the waist of a model with a 65 centimeters waist, as seen for example in his collection for the spring-summer of 1948, making the models appear to be wearing light dresses and supremely elegant of course. How does MGCH interpret this tradition of the House of Dior?  She pays tribute to the toile de Jouy, a tulle that has been revised and modernized, stamped with picturesque scenes that emphasize images of  undomesticated animals, including tigers and snakes, instead of the traditional solid and pastel color and powder tones of beige colors. MGCH transformed the tulle skirt and the jackets into garments with a defined and assertive air. The wide and extravagant skirts are worn with tight jackets made of Japanese cotton and they are combined with pants of various shapes that accentuate the narrowness of the waist, emphasized with a high belt.

To refine the waist, MGCH adopts the style of Escaramuza dress, to these models of Christian Dior wearing black  or colorfully embroidered leather belts almost 10 centimeters high. “… and ordered that the leather had to be cut with lasers to create not only a strong image, but also consistent with other elements of craftsmanship from that region of Chantilly, a small village two hours north east of Paris.

A region also known for its horse racing course, where Aga Kahn III  whose daughter in law was Spanish American actress Rita Hayworth MCGH presents delicate dresses contrasting with military-style boots with a thick sole, spinning   tradition  in a contemporary “punk” way, replacing the Jalisco-style boot with a thin sole as required by the rules for dressing by the Escaramuzas.

According to the National Charreria Federation, AC (chapter II)  of México, only allows the colors bone, honey, ocher, coffee, brown, wine, gray, serious green or navy blue. And with a horseshoe impressed on the outside of each boot, as the Escaramuza El Tulipán from Querétaro México, 2014 National Champions, indicated. The contemporary Christian Dior military boots were perfect for the night because it rained over the entire outdoor runaway. The hats of the models were designed exclusively by the renowned Mr. Stephen Jones of England, for  the House of Dior, the skirt of the hat is rather small and round to caress the head and to draw the hair elegantly backwards in a “ponytail”. She designed a special wide-brimmed hat for the Escaramuzas riders, in black, white.

These hats, unlike the traditional Escaramuza charro’s hats, can be adapted very easily to any other activity in the city and can be practically  used with everything. Dresses, pants, long skirts, culottes, shorts, etc. that protects both from the sun and the rain, as could be seen that night at the Grandes Ecuries du Domaine de Chantilly where the catwalk was mounted around a sandy arena as in the Mexican charreadas, created by the director and producer Alexandre de Betak. The team of Mexican Escaramuzas and its trainers arrived in France and were given the opportunity to ride the famous white Chantilly horses. Maria Grazia Chiuri designed a dress especially for them all white with black details, these dresses were more traditional following the rules for the Escaramuza, stamped with elegance by a white rebozo with black polka dots on the riders’ shoulders.   Christian Dior combined with Escaramuzas! Who would have dreamed? The impression that was made was regal.

The fashion show took place in a “lienzo”  at the Grandes Ecuries du Domaine de Chantilly where the catwalk was mounted around a sandy arena in the garden of a castle,  as in the Mexican charreadas. This stage was created by the director and producer Alexandre de Betak. The entry was adorned with beautiful ribbons and the traditional “papel picado” made in México. A perfect welcome detail.

Why Isabel ? Maria Grazia Chiuri indicated that this collection was also inspired by the book of the Chilean writer of  The House of the Spirits. Isabel Allende, as well as the magic realism of the books of Gabriel García Márquez Cien años de Soledad.  Isabel Allende is an author that we have celebrated in  Revista Mujer and was a special guest of the designer for the House of Christian Dior during  showing of the Cruise Collection for 2019.

Why Chantilly? This a city is linked to the tradition of manufacturing lace, but also to a great equestrian tradition in France, the city being very relevant to and creating a symbolic framework for the showing of this specific collection. A chantilly black lace dress was a  tradition for a woman in mourning. MGCH used this tradition working in black lace for some of her most distinguished and elegant dresses, inspired by the style of escaramuzas. Finally it must be noted that not only the escaramuzas were in the spotlight in this event but also, among the models on the catwalk, there was a beautiful young Mexican from Guadalajara. Mariana Zaragoza, a young woman who has conquered the runways of Europe this past year, and who we will have the pleasure of interviewing for our Spring Edition 2019! 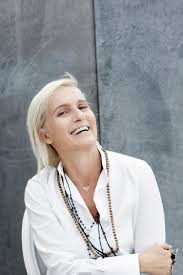 A MESSAGE FROM THE DESIGNER

Also, the designer wanted to make sure that this collection was not about horses, but rather about the idea that women can do things, almost anything, like the daring equestrian choreography women supporting each other as the Escaramuzas do during a performance.

“The forms are really Dior, beautiful and light, but at the same time they are also strong” said MGCH. At the end I feel that “the future is of the woman supporting others”, says Maria Grazia.

In the documentary presented by Made to Measure about the life of Christian Dior you can appreciate the intricate detail and care of these fabrics and others used regularly by Mr. Dior. In October 2018, the House of Dior commemorated the 61st anniversary of Christian Dior’s death. LRM