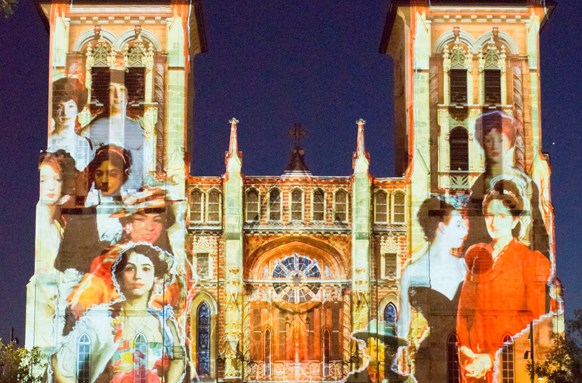 SAN ANTONIO AND THE RIVER OF TIME

We join the City of San Antonio for its tercentenary. The city seems to be reborn with the celebration; it appears everyone in town is happy and proud to commemorate  this anniversary. San Antonio has undergone a major renovation at various of its sites, charged with history, evocative of its mythic past to emphasize its visual splendour.

I was there and able to witness all of this. I could not help thinking that behind all the great achievements, ancient and present, women’s participation in the public life of the city has always been decisive as well as enduring, although sometimes invisible in a traditionally patriarchal society.

The women of San Antonio have had, sometimes against the odds, the vision, energy, and strength to defend, preserve and enhance the beauty of this great city. If you look closely you will find the women of San Antonio, whether from Texas, other states, Mexico, the Canary Islands, the Philippines, Germany or Spain, such as the recent royal visit of Her Majesty Queen Letizia of Spain, have left their mark one way or another in the city. The vision of San Antonio’s women is apparent in its historic hotels such as the St. Anthony, in its world renowned museums (Witte, SAMA, Macnay), and its unique cuisine, which has lead to San Antonio’s recognition and designation by UNESCO as a City of Gastronomy.

But above all by defending the city’s culture, restoring the past and preserving it for the future as has Mexican architect Mónica del Arenal, former director of the Mexican Cultural Institute, they are part of a new generation of women who are bringing a certain energy to the culture of the city. As Sherry Wagner, founder Executive Director of the Women’s Pavilion and wife of architect Cy Wagner, known for his master plan of 1963 Paseo del Rio commented in an interview, “If you take away the things made by the women of San Antonio, such as Adina de Zavala who fought fiercely to save the The Alamo, for example, you would have a pretty boring city.”

To begin, thank goodness for the San Antonio Conservation Society, the first in the United States. It began with 13 women who attended its first meeting in March 1924. From 1939-1941 they collaborated in the creation of the San Antonio Riverwalk, and in 1926 they supported the opening of the city’s first public museum, The Witte. In 1929, they led the restoration of the Spanish Governor’s Palace. In 1936, they completed the restoration of the San José Mission. The Women’s Pavilion of the World Trade Fair of 1968 of San Antonio, founded and built by women,  whose objective was to pay homage to the “eternal woman”, according to a press release of August 1967, “to represent the achievements of women in the past, present and pointing out their responsibilities for the future.”

The exhibitions inside the Women’s Pavilion during HemisFair ’68 paid tribute to women in the areas of fashion, art, science and education.

The beauty, the mind, the heart and the work of women were the four themes exhibited in those years.

The Hemisfair Park, where this pavillion is found, is currently undergoing a colossal three phase renovation, which includes Yanguana Garden,designed by Susan Goltsman, and the Civic Park, designed by Katherine Gustafson and the Tower Park.

The Witte Museum has been rejuvenated after its renovation costing 10 million dollars under the direction of Marise McDermott, president and CEO, under whose leadership has been the recipient of the prestigious Silver Award for Best Set Design for a permanent collection of the International Design and Communications Award (IDCA), competing with 350 museums from around the world.

The renovation of the San Pedro Creek Cultural Park,directed by Suzanne Scott, executive director of SARA, inaugurated on May 5, transformed a historic creek which had been allowed to diminish until it became a drainage ditch now back into a natural stream habitat and a linear park. Two of the four San Antonio artists who created a mural for the embankment of this creek are women, Adriana Garcia and Katie Pell.

The San Antonio Museum of Art

The San Antonio Museum of Art  (SAMA) displaying one of the largest and only exhibitions (under the direction of Katie Luber) in the world of this kind: 500 years of Spanish painting brought directly from the museums of Madrid to celebrate the tercentenary of the city. This exhibition in San Antonio is truly unique, and some of these paintings have never before been seen in the United States. Ruby City, an art complex which is  the most significant recent development in the city’s arts was founded from a woman’s actual bedtime dreams, Linda Pace, being another example of the strength of the San Antonio’s women among other examples too numerous to describe, stretching back as far as early 20th Century printmaker Mary Bonner ,   in a small magazine like this.

SAN ANTONIO, “ONE OF THE COOLEST PLACES ON EARTH”.

Celebrating the tercentenary does not only mean celebrating the past of the city but also the way to the future. As the New York Times art writer wrote in 2008 about the art world found in San Antonio, “San Antonio is a hot, dusty Spanish city and one of the coolest places on earth.”