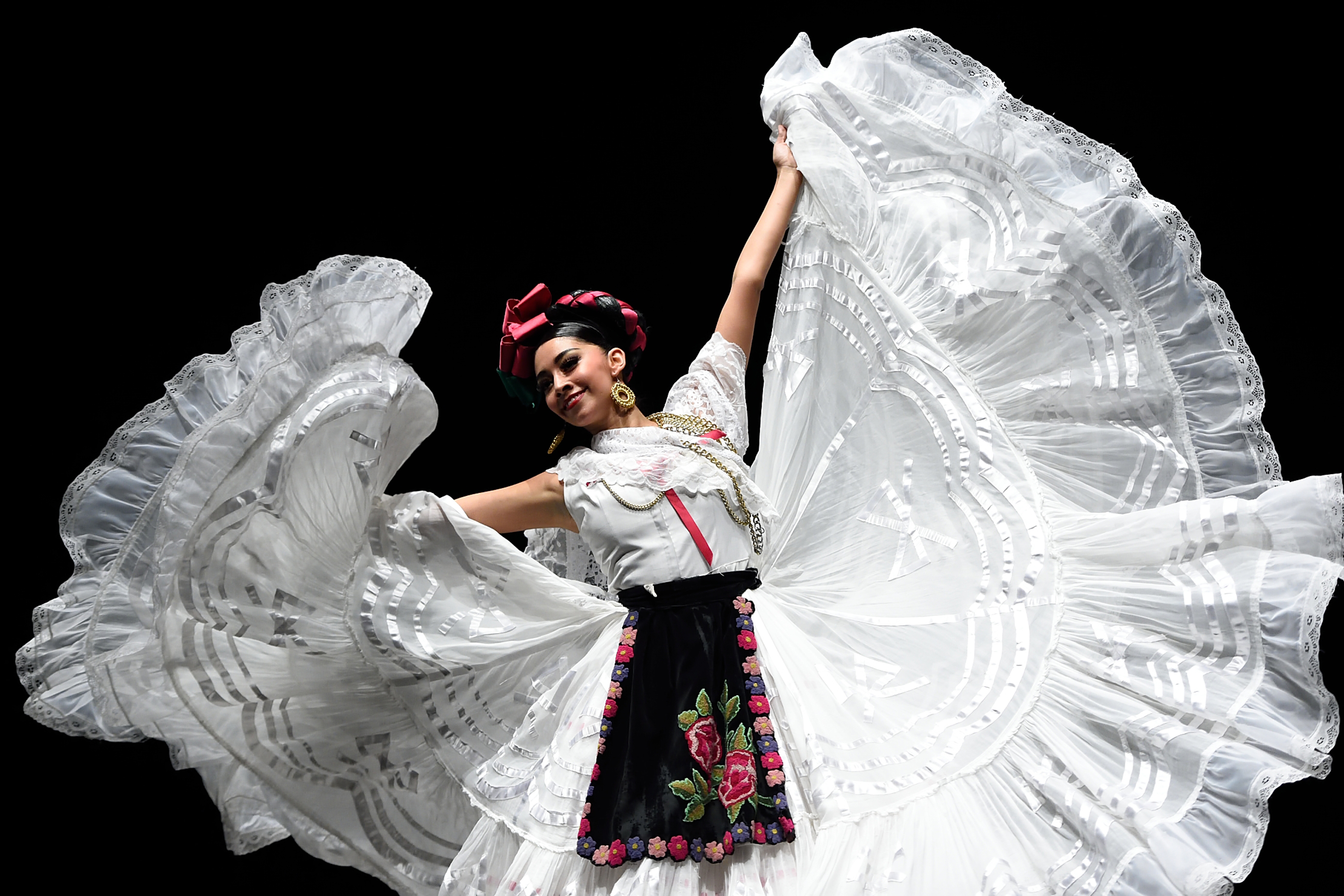 AN EVENING WITH THE BALLET FOLKLÓRICO DE MÉXICO, A CELEBRATION OF HISPANIC HERITAGE

We proudly celebrate our Hispanic heritage this year with the Mexican Folkloric Ballet and the legacy of the great founder of the same, Amalia Hernández, whose centennial was celebrated last year. Just mentioning the “Ballet Folklórico de Amalia Hernández” automatically produces a great wave of affection, joy, admiration and respect for Mexican traditions. Not in vain this ballet is referred to as the beloved Mexican artistic ambassador and soul of Mexico. It has presented more than five thousand performances and Amalia Hernández and the folkloric ballet of México have been rewarded with more than 300 awards in recognition of their artistic merits.

This past October 4th, the Ballet performed its single performance in Austin, Texas at the Long Center Theater, with a theme of the historic journey through Mexico by way of its dances from the time of the Aztecs to the present.

From the moment the audience reached their seats in the theatre, the music began with the curtain opening on the first dance, The Great Tenochtitlán. As a viewer you had the creeping notion that you might have been present in the time of the Aztecs, the dance symbolizing the rituals of the ancient discovery of the eagle devouring the snake and the building of the great city of México. The dance of Las Adelitas, took the audience to the time of the Revolution of 1910, and speaking for myself, is one of my favorites because it is dedicated to the soldaderas, the women soldiers wearing their long skirts and who joined the battle for the first time in history to support their men, carrying their rifles with them in México’s great struggle. The purity of the white dress the women dancers exhibited during the dances of the Veracruz region and the firm zapateado sounds of the male dancers rambling in the wooden tarimas were loved by the audience. Contrasting with the dance of the single calavera or skeleton in pink, celebrating the Day of the Dead, where the influence of a new generation of dancers of modern dance is made obvious, as one of  the calavera seems to dislodge its own bones, to shake apart, contorting its body with unexpected movements.

The night continued with more dances and the excitement mounted when suddenly there was silence, and then only three dancers appearing on stage performing the stirring Dance of the Deer, of the Yaqui Indians of Sonora, known for their long tradition of hunting. It is often remarked and popularly thought in Sonora that this particular dance brings luck to the hunters. The audience admired and broke into spontaneous applause for the dancer’s interpretation of a deer.

However, during the show I, as a member of the audience, could not help it but thinking that all these journeys, memories and stories told through dances are due to a great woman, Amalia Hernández. Who was this woman?

Last year I had the opportunity to interview Amalia V. B. Hernández, the only daughter whom inherited what must be called the legacy of Amalia Hernández, the founder of the Ballet Folklórico de  México during the celebration of her centenary. And what daughter Amelia remembers most about her mother was “her dedication, her discipline and her firm belief that you cannot lead without example. She instilled in me a profound love for Mexico”.

“Before mounting a choreography, my mother traveled by bus throughout the region she was interested in at the time; she looked at the dance she was contemplating physically, based on stories, legends and myths of the Mexican narrative. She also adopted the colors of the local textiles, ate the local food, participated in their regional folk dances and absorbed everything. She was a combination of an amazing teacher with attributes of a military general; she brought every one of us to a march, always with her sense of discipline; nobody escaped (laughs)”, says his daughter Amalia V.B. Hernández.

How do you create a new folkloric dance?

“First the idea is conceived and its background is investigated thoroughly: its history, traditions, legends, and determine if its character is festive or religious, get involved in the emotions, see if the musical analysis is coherent with the language and if the costumes symbolize the meaning of the dance and the region it represents. The public does not see all this work, but when these elements are well harmonized they offer an unforgettable show”, Amalia V.B. Hernández remembers. “For a dance to become folkloric, it has to be used and used by the region for at least 50 years. For example, my mother composed the dance of the northern polka “La Picota”, because before it did not exist”.

What is the future of the Ballet Folklórico?

“The Ballet Folklórico will continue to be the Ambassador of Mexico to the World. Today México needs a positive, new language, representing a country rich in living traditions. Folkloric dance will survive, and it will slowly evolve, like everything in life. Our legacy represents the past, the present and the future at the same time since in México we are fortunate to have a fusion of African, Arab, Gypsy, Spanish and European traditions in general”,  states Amalia V. B. Hernández.

The show this evening ended with the mariachi musicians representing the festivities of the state of Jalisco, the land of charros and a symbol of Mexican national fervour. Women dressed in china poblana outfits and the men in the ornate suits of mariachis. Women’s skirts swirled to the sound of La Negra and Jarabe Tapatio songs, capturing the soul of México. They were a vision in red, floating over the stage and people in the audience joining in, singing, with a total release of an intensity of emotions that had been building over the course of the performance, shouting, Viva México! The applause did not cease and suddenly, to the chorus of “Otra, otra, otra…”, or encore, the public demanded the mariachi play another song and this time the dancers did not dance on the stage but left it, stepping down to join the audience below, dancing with the guests in the corridors of the theater. The children, young people, mothers and grandparents and your reporter herself, we all enjoyed it in a contagion of enthusiasm, leaving all with the sense that the folkloric ballet is from México for everyone. An unforgettable experience that everyone should see at least once in a lifetime.

The acoustics for the Mexican dancers were perfect in the Long Center Theater as this one in particular has technical elements that are not found even in the best theaters in the country, such as the concrete shield for the ceiling, acoustic banners throughout the walls and an orchestra deck tailored to protect the audience chamber from external and environmental noise such as coughs, candy wrappers, traffic and thunder. Its clarity of sounds makes the experience more accurate and at times, stunning. This fact stayed in my mind after a grand tour by the theater guide years ago and tonight I was able to confirm it.