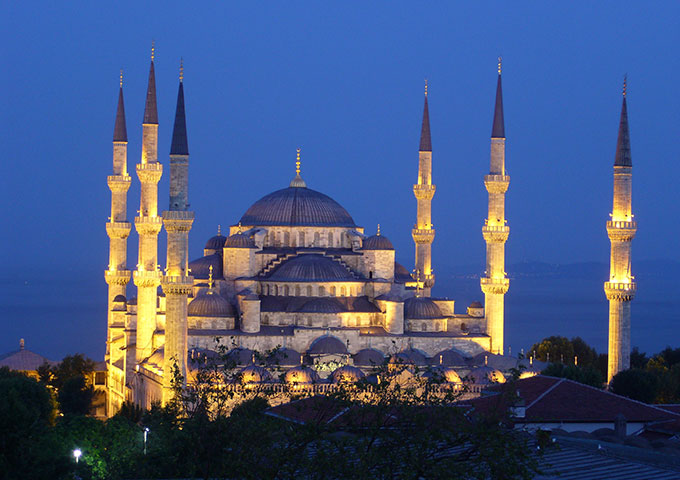 In my years exploring new destinations and having had many experiences as a traveler, I had never found a travel program as convenient as “Stopover Istanbul”. This program offered by Turkish Airlines, exceeds all travel expectations that a frequent traveler may have. Not only does it give travelers the chance to get to know such an impressive city, full of history and culture like Istanbul, but it also makes the waiting time for connections with other flights less burdensome and instead of getting to know only the expected destination, the traveler could also have the opportunity to visit two other destinations. The last one: the beautiful city of Istanbul. We arrived at the George Bush International Airport, where we expected the eight hour flight, that goes from Houston to Istanbul. After boarding, I can say that it was a unique travel experience. From the most comfortable seats, to the in-flight chefs who promise to prepare the most delicious dishes you can have on an aircraft. The flight service exceeds the expectations that any demanding traveler may have.

We reached our final destination where private transportation was waiting for us, it is a “very nice to have”, since this private transport options ensure better transfer and communication in a country where the language is a limitation. Then we arrived at our hotel, which is also part of the “Stopover Istanbul” program; this means, your stay in Istanbul is courtesy of the airline for one night if you travel in economy class and for two nights if you do in business class. Once we arrived at the hotel and on our first dinner outing, I thought: never a connection has been as fun as this one. Having the option of resting in a five star hotel, knowing and exploring a new place, everything included in your rate! This is priceless! I was so looking forward to exploring the only city in the world located both in Europe and Asia. Our second day begins and it’s time to get to know the historic center in Sultanahmet. The area where the most internationally recognized monuments, old palaces and mosques are concentrated. Here you’ll find the famous Zaul Mosque, the Hagia Sofia, The Sultan’s Palace, among others. We start our day with a tour of the Hagia Sofia. Immediately our tour guide instructed us about the rules and protocol to enter the different temples of worship. The first rule when visiting one of the mosques is to remove all the impurities before entering any temple, washing our hands and face in the piles located outside the mosque. The singing by the Imams, as a call in moments of prayer, are typical and traditional sounds in the city of Istanbul. When you walk through the streets you can hear these beautiful, inspiring and solemn calls to prayer as part of experiencing the culture of the country. Returning to our tour through the Old City, we finally arrived at one of the most historic temples not only in Istanbul, but in the whole world: Hagia Sofia, which at first was a Christian Cathedral, then a Muslim imperial mosque and now a Museum.

To end our day, we visited an art therapy workshop and learned one of the oldest art techniques in Turkish culture: Ebru or marbling on water, also known as the art of patience. Definitely after a day full of activity, the Ebru brought a very particular connection and relaxation among the group of travelers and tourists who had the opportunity to practice it. Unfortunately our last day arrived in Istanbul and there was still much to do. The city has much to offer and knowing that you have only three days, makes you fall in love with the city even more. One of the moments that I will always remember from the city of Istanbul is undoubtedly the impressive and historical Ciragan Palace Kempinski, which is located in front of the Bosphorus. The palace was built by Sultan Abdulaziz between 1863-1867. This historic hotel, after being destroyed by a fire in the early 90’s, became the soccer stadium of the Turkish team Besiktas. Currently the palace operates as a five-star hotel where celebrities like Madonna, Bono the singer of the U2 band, Sting, as well as royalty personalities, among others, stay. Thanks to the experience of being in front of the Bosphorus and the spectacular Ottoman architecture of this place, is that important celebrities pay more than $ 30,000 per night for the Sultan’s suite. If you are in the city of Istanbul make a strict stop for the Ciragan Palace, one of the unique places in the world that make you feel like part of the royalty. And finally we could not leave without visiting the Grand Bazaar, where I realized that I had been impressed by large shopping centers in other parts of the world, but the Grand Bazaar surpassed any other market in the world, with more than 4,000 stores under the same roof. Women: on your next visit to Istanbul be sure to spend at least one whole day just to explore the Grand Bazaar and of course take out your talents as good businesswomen, because it is said that in Istanbul you can get the best jewelry at a price that nobody can explain. So have your comfortable shoes ready and more importantly, your negotiating techniques. Something that you cannot miss in the Bazaar are the spices and famous Turkish delicacies, a crucial part to get to know the Turkish gastronomy. My favorites were the ones made of pistachio. As a Turkish proverb would say: In conversation as in food, you should never miss food or the famous Turkish coffee. By the way, the Spice Bazaar is ideal to find good Turkish coffee; as a coffee lover, I could not return from my trip without bringing that famous and delicious coffee from Kurukahveci Mehmet Efendi, where the row to buy it was all around the corner. Once we finished our tour of the Grand Bazaar and the Spice Bazaar, we could not leave Istanbul without knowing its nightlife and what better place for this than Taksim, here the nightlife is experienced to the fullest. We arrived at the famous Club 360, a rooftop with a view as its name says, of 360 degrees. With this spectacular panoramic and an authentic Turkish atmosphere, the Club 360 operates as a restaurant before 10 p.m. and then it becomes a club, where if you are lucky you leave at 5 a.m. and then you have no other choice than take a Turkish bath. These were three unforgettable days in a city of charm, full of culture, history and beauty, but it was our time to leave. I left with the sensation that Istanbul opened my eyes to a new and ancient world. I fell in love once again and it was with you Istanbul. See you soon!

Green within glass at the San Antonio ...