MARIANA GORBEA: Mexican Graphic Designer on leaving her mark on GAME OF THRONES 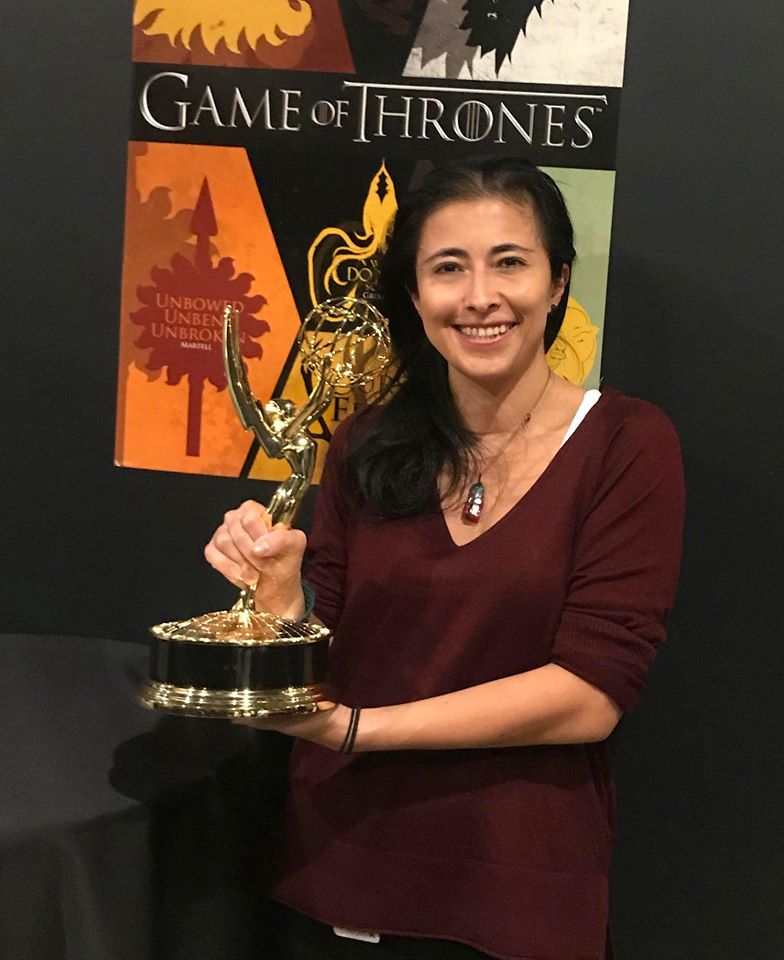 Mariana Gorbea, is a Mexican graphic designer who’s talent shines  in the making  of visual and special effects for the last season of the successful television series Game of Thrones, consequently  receiving a second Emmy Award in the category of Special Effects. This series has had an audience of just over 19 million all over the world.

With her accomplishments, Mariana has raised the bar not only for Mexico itself but for women all over Latin America with that SECOND EMMY Award. In addition, FORBES  Magazine of Mexico 2020 has just named her this year among the Mexicans who are making a  mark upon the world today in the seventh art,the cinema in all of its forms.

We all know that behind a great series or film, there is usually an equally great talent at work, one of them is Mariana Gorbea, a graduate of the Graphic Design Department at the Universidad Iberoamericana, and a member of Scanline VFX in Canada.

Mariana Gorbea was commissioned to digitally model the city of King’s Landing, as well as the  Daenery’s and Cersei’s armies, along with all their weapons. Her participation and that of her team, was mainly shown in the fifth episode. Specifically where one of the most popular characters in the series, a woman Khaleesi  (roughly equivalent to a queen) Daenerys Targaryen – decides to destroy King’s Landing with the help of her dragon.

The  destruction you see is  caused by the Dragon, but behind the scenes, as you would guess it is the work of Mariana Gorbea and her team, in charge of the digital modeling of all the houses, buildings, rubble, rocks, props, as well as some characters and weapons of both armies (Daenerys and Cersei).

Mariana’s first Emmy was awarded for Black Panther and Captain Marvel. Her work and achievements have now been recognized and as she would tell anyone who asks, the secret to her success has been  “communication and teamwork”.

============
A few months ago we contacted Mariana Gorbea in Vancouver, as she has just returned from México City. We at the magazine were thrilled to hear about the Emmy award and always ready to honor and celebrate a Mexican woman succeeding in a major world production as a graphic designer.

She graciously accepted our request for an interview via the podcast Me Encanta from La Revista Mujer. And we are pleased to share her comments and responses below. Our impression of Mariana from our conversation is that she is a woman of an enviable and winning modesty.

FROM MÉXICO TO CANADA

Mariana Gorbea was born in Mexico City and currently resides in Vancouver. She considers herself a self-taught artist. She began as a Graphic Designer with a degree from  the highly respected  Universidad Iberoamericana in Mexico, but made the transition to digital and traditional sculpture of characters and creatures. She currently works in the film industry in a visual effects studio as a Senior 3D Modeler in Vancouver

When Mariana arrived  in Vancouver, she had no idea what she was going to work on.

“ I had heard simply that I was going to work on big projects. I didn’t know it was with Games of Thrones, much less ever expected that I would be recognized with Emmy Awards.  When I got there, I just hoped  to work on my own thing,” says Mariana.

Her life has changed a bit after these awards.

“One thing that has been very satisfying is that students come up to me and ask me how I did it and being able to help them with something has been very rewarding,” explains Mariana. She has also been contacted by various media to do interviews and schools with the aim of  encouraging the study of graphic design.

Mariana is a senior modeler at the Canadian company SCALINE VFX. One of her main functions is to be a digital modeler. “I also do digital sculpture which is what I like the most. It’s like real sculpture, but all through a computer. A little bit of both.”

It was not easy for Mariana to get to the level she now finds herself at professionally. “It was difficult, I didn’t know anyone who was working on what I’m doing now. I had to start knocking on doors in all the studios around the world and finally I found this studio in Vancouver,” Mariana explains.

In her work, Mariana does not believe that the software tools currently used in her work will ever displace traditional graphic design techniques.

“I believe that the tools in the industry continue to change because it is our job to adapt to our new technologies, but the fundamentals of design do not change, there are universal concepts that will never change.”

Mariana says that the biggest challenge in working on the special effects of the GOT project is that there was a lot of expectation.  “Telling a story that visually appealed to so many people and fans who followed the series was always a very present challenge,” Mariana says.

NO ROOM FOR FAILURE

Another major challenge is that in this type of visual effects, you can’t afford to miss any angle. “I mean, you can’t let anything go wrong, because then literally everything will fall apart! So you always are under a lot of pressure,” says Mariana. “This is a series that is already very well known, and the expectations of the audience are higher and as I have said, you can’t let yourself  fail.“

“Television times are shorter than a feature film – that was one of the most real challenges. If I’m late, being late will become a snowball that affects everyone.”  All these challenges are very real, however Mariana has managed them successfully.  The secret as she confides is  “ Great communication with your team.”

COMMUNICATING WITH YOUR TEAM

“When you have very good communications between what each person should do, or what is expected from each person or team is when the magic of teamwork happens”.

WOMEN IN THIS INDUSTRY

Contrary to other industries Mariana comments that “something interesting is that she has never been affected by being a woman, that  has never been an obstacle to standing out in this industry.” The number of women participating, working and excelling in projects like GAME OF THRONES continues to grow.

“It is completely irrelevant whether you are a woman or a man in this industry, it all comes down to the quality of your work. What you need is confidence, that’s fundamental to being able to excel in this industry.” – Mariana Gorbea

Mariana tells us: “I arrived almost six years ago and every year I see more and more women working here and now I think there is practically a 50-50 men/women ratio in all departments in my job today.”

When asked if she makes references to the culture or architecture of Mexico to visually contribute to other projects, Mariana comments: “No, I’ve never been asked this before, but the truth is that we have to focus on the region where things actually happened according to history.

For example the city where Game of Thrones was filmed, they sent us a digital photometry – of the whole city – and based on that,  we started to duplicate the buildings, the constructions completely.  So I couldn’t contribute with something from another place or country, we had to be faithful to the time and the geographical region.”

FUTURE OF THIS GENRE  FANTASY/REALISM

The Game of Thrones genre is considered to be both realistic and fantasy, which may be  a trend in stories going forward in the future, or maybe the opposite, going out of fashion.

However Mariana is positive: “I think we will definitely have this fantasy/realism genre for a long time to come, there are more and more series and studios and we have a lot of work scheduled for  us over a  long time ahead, – people like it a lot and ask for it, so it’s very good for me! (laughs).

Also, technology is becoming more accessible and faster and there are a lot of people who can create this kind of entertainment all over the world.

Now that Game of Thrones is over, Mariana is working on some interesting new projects. For example: “I’m working on a Godzila vs King Kong series – imagine – more monsters! .hahaha, and I have other Marvel projects, but I’m not allowed to reveal them at this time.”

One piece of advice that Mariana could give a woman to excel in the special effects industry is this: Learn to solve problems on your own.

“To learn special effects, something that has helped me a lot, was learning how to become self-taught, because I learned to solve problems by myself, because I only had myself.”

“That helps me a lot today at work. So one piece of advice is you yourself learn how to adapt, become resourceful  and solve problems!”

Living in Canada, far from the Mexican culture, Mariana expresses that what she misses most is the food. “I miss  tacos al pastor a lot!  Also the Pozole, barbacoa, – to live without satisfying those cravings – has been one of the most difficult things. Because “I can talk to my family and not miss them much when I talk to them, but nobody can provide me with tacos – or send me tacos over the telephone!” Mariana explains with laughter.

What she loves most and makes her happy is making traditional sculpture. “ Basically the same thing I do digitally, but real, with my hands, to get away from computers, and it’s my hobby. That makes me very happy! “

We are thrilled to celebrate Mariana Gorbea and her accomplishments in the special visual effects industry. She reminds us that we should never to let others decide how far we can go. You should aim for what you are passionate about. Mariana is an example of personal resourcefulness, independence and knowing how to succeed with a sense of yourself intact.