THE ST. ANTHONY: A HOTEL FOR A QUEEN 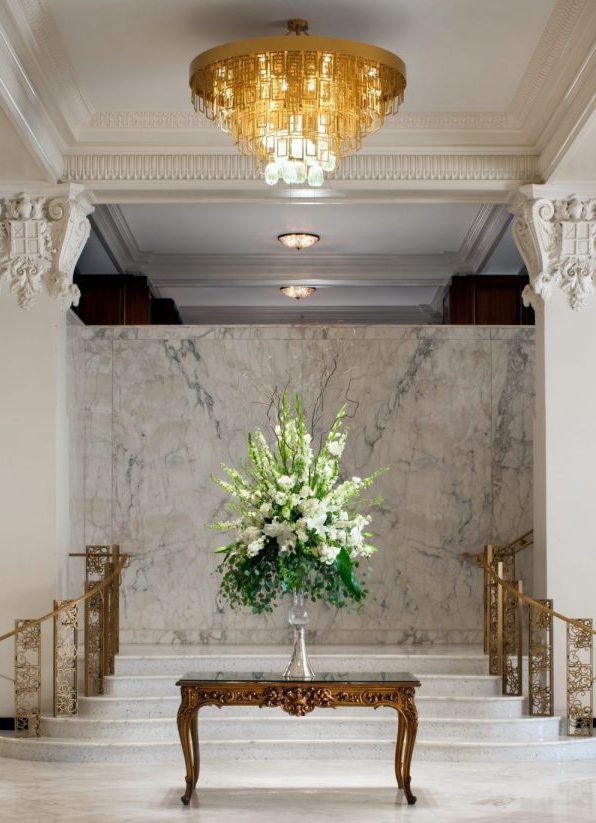 The St. Anthony Hotel is one of the most beloved historic hotels in San Antonio, which was recently reborn after the completion of an extensive renovation carried out over a period of two years. Rated as one of the best hotels in Texas Condé Nast Traveler List, this national historic monument stands out for its sober elegance. It represents a mixture of the past and the present, eternally accompanied by the strength and beauty of a woman from San Antonio. Historically they call it “The Queen of San Antonio”.

The Hotel St. Anthony seemed the ideal place to stay during my visit to celebrate the 300 year anniversary of the city. Located in the downtown area of San Antonio, with its three centuries of history, just across from Travis Park, three blocks from the Alamo and the Paseo del Río, it was the perfect place to contemplate and explore the city’s vivid past.

After passing through its elegant entrance in the lobby with its ornate, and trademark  chandeliers, the concierge and his staff welcomed me and offered a cocktail. By the way, he remembered my name for the entire four days I was a guest. The Hotel St. Anthony was founded by two important Texas cattle ranchers, B. L. Naylor and A. H. Jones who honored their vision of opening the first luxury hotel in San Antonio in 1909. Their hotel was the best expression of hospitality, luxury and comfort in the Southwest at that time. Rather than a “cow palace” decor that might have been expected considering the founders and those years of boom times in the beef markets, the hotels interior was focused on old world interiors, Italian marble and Corinthian capitals.

And modernity was emphasized. For example, it was the first hotel in the country to offer air conditioning in its rooms, which in the blistering heat of San Antonio, delighted the guests and set standards for the future in Southwestern hospitality. Also, it was the first hotel with a private entrance directly to the rooms so that guests would not be seen improperly suited until they were clean and refreshed from their long trips by carriage before entering the lobby. That blend of past and present that was offered to the hotel’s first guests still remains alive even up until now.

In 2013 the Hotel St. Anthony undertook a meticulous renovation that lasted all of two years, in order to restore this ancient jewel for a new generation of guests. For example, the original Venetian tile mosaics were discovered and polished. The original sculptures, tapestries and murals were restored to the level of museum quality.

Among other things, the impressive Steinway grand piano was also recovered, originally manufactured in 1924 for the Russian Embassy in Paris. After a long search, it was found and repurchased at enormous expense, rehabilitated and returned to its rightful place, Peacock Alley, dazzling the hotel lobby. This piano has witnessed so many guests gathered around it over the years, the stories and conversations, well you can only imagine…

WOMEN IN THE ST. ANTHONY

Each floor of the St. Anthony hotel has a different mosaic design. No, they are not a modern design, or an abstract painting. Rather they reflect the design of the dresses of the past Fiesta queens. Also the rooms on each floor have two prints framed in black and white reflecting one of the designs of Fiesta Dresses from over the years. It is another example of mixing the old with the new. You cannot talk about the St. Anthony Hotel without talking about women. Its halls, rooms and celebrations which have been surrounded by beautiful and independent women, either as guests or as part of the group of people that created the hotel. For example, in the renovation of the hotel in the 50s, the renowned New York decorator Dorothy Draper, internationally known for her swank glamour, instilled in the hotel what she called “traditional touches, with touches of modernity”, a permanent stamp that can still be seen in the living room of The St. Anthony Club bar.

Dorothy Draper was a woman who was born into a wealthy family and grew up in the wealthy and exclusive community of Tuxedo Park in New York City, and who established the first professional interior design company in the United States, bold enough to be one of the the first independent business women in the U.S.

Among other women that deserve mention in connection with The St Anthony, are the former first lady, Eleanor Roosevelt and Princess Grace of Monaco, who were guests, as well as the Hollywood icons Judy Garland and Lucille Ball. Undoubtedly, the most recent and distinguished royal guest of the hotel  has been Her Majesty Queen Letizia of Spain, during her visit to commemorate the Tercentenary of San Antonio.

But there is nothing more noteworthy locally in relation to women and the hotel than the coronation of the Queen during Fiesta San Antonio.

CROWNING OF THE QUEEN

For more than 100 years The St. Anthony Hotel has been recognized as the home of families with daughters whom attend the coronation of their queens during Fiesta in San Antonio. The Order of the Alamo was founded in 1909, and its members choose their distinguished queen and her court.

The St. Anthony has organized a reception for the queen and her court for all these years. It consists of an extravagant celebration where families, guests and the royal court can view the incredible dresses of the queens. The reception of the queen in the Anacacho Ballroom at The St. Anthony is still a highlight of the Fiesta. And as before, the painted mosaics in the hotel reflect dresses past.

Mosaic detail reflects the design of the dress.


One of the details that few people observe but that can be appreciated in the hotel, are the designs of the mosaics when you walk in the corridor of each floor. If you look towards the sides of the carpet, you will discover the original mosaics that reflect the designs of the dresses of the queens in different coronations.The mosaic show the patina left by time, leaving the past reflected in harmony with the present.

The new executive chef of the Hotel, John Zaner has directed a culinary transformation. Breakfast, which I started out with as the first meal, was sophisticated with  regional ingredientes traditional to San Antonio.

That first morning, I was greeted with a breakfast prepared on the table, oatmeal with pecans from the region, with dried peaches, grapefruit honey, and a small empanada baked with mango and cinnamon filling. Next to it, Mexican papaya, passion fruit cut crosswise displaying its pretty lavender and pink colors next to a mango delicately cut into cubes in its own shell and a piece of pineapple with touches of Mexican chili powder resting on a white ceramic spoon, for its tasting. The second course of breakfast included: organic eggs poached on smoked brisket and toasted corn hash, and next to it, sauteed shrimps with chipotle, toasted bread with bacon and jalapeño and avocado in chunks. At the end, to clean the palate, dessert: a parfait of horchata and raspberry, Mexican pastries conchas, baked in miniature size. European coffee and freshly squeezed orange juice and grapefruit. It was splendid!

This summer, the reinvented restaurant on the ground floor with its new name Gallery On the Park is open. Located in the sparkling atrium of the hotel, where the landscape of Travis Park can be admired, through impressive floor-to-ceiling windows while enjoying the new menu, or just having a cup of tea, as this atrium was famous for during many years. The new restaurant will exhibit art in the walls, available for purchase.

The hotel space of the San Antonio Club on the first floor has witnessed events significant in the history of the city and, at times, the nation. For example, it was there that a few local businessmen, weary of crossing Texas by car, came up with the idea of creating an airline in Texas that would transport its passengers easily from one regional city to another, the end result: Southwest Airlines. There is an innovative and inviting swimming pool, huge in size, located on the roof of the hotel’s tenth floor. There is nothing more corrective to summer heat than a dip in the water, and in this case it is accompanied by an intriguing view of the city of San Antonio. In front of the building a name with phosphorescent lights in red stands out: Maverick, a name that will make you recall more of the city’s past. Highly recommended is a recently published book Dusting Off History, which subject is the occasion of this hotel’s historic renovation. This stay in San Antonio  celebrating the Tricentenial was nothing but memorable. I recommend that if you want to come for a couple of days, choose the guest package “Ultimate San Antonio Tricentenial Getaway”. The St Anthony deserves to become part of your own history.

Find out more about it at www.thestanthonyhotel.com

5 Steps to Apply Emotional Intelligence In ...