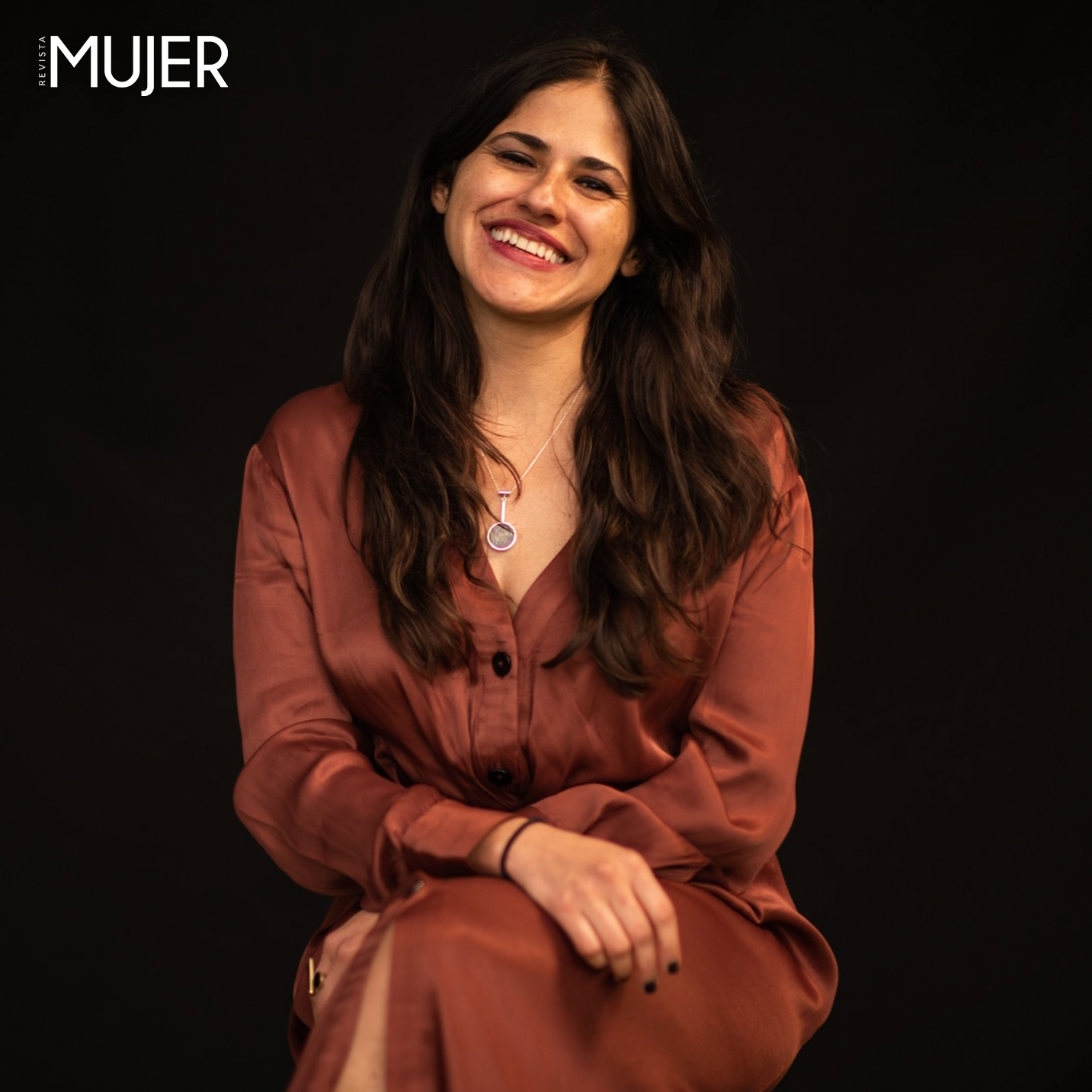 Iliana Sosa is a documentary filmmaker and Assistant Professor Tenure Track in the Radio, Television and Film Program at the University of Texas whose debut documentary WHAT WE LEFT BEHIND, won a Lone Star Award at SXSW 2022. The documentary features her grandfather Julián, who at the age of 89, makes one last bus trip to El Paso, Texas, to visit his daughters and sons.

This extended journey he has made without fail every month for decades to collect his social security benefits earned as a short term contract laborer or bracero in the US under the government supervised work program of of 1942, one of millions of Mexicans who enrolled in the project.

Iliana is a first-generation Mexican-American who grew up in El Paso, Texas, and as a child, she remembered her grandfather taking advantage of his being in the north and visting her family during his short stays.

As we began my interview with Iliana Sosa, we spent a few minutes before deciding which language best to conduct the interview. I immediately felt at home with this nitial dilemma and it was a pleasure to continue in a duality of languages, Spanish and English, that is so natural among people who grow up on the U.S.-Mexico border.  (Language on the border is a gift that we from there have, with the ability to switch languages from one moment to the next and let the conversation flow, just like that.)  We dicided to speak primarily in Spanish.

However, the reason for my interview was another matter, not language but images. An even stronger and more direct language that in the hands of women like Iliana Sosa has an emotional force, as in the case of her documentary film “WHAT WE LEAVE BEHIND” (LO QUE DEJAMOS ATRÁS).

Iliana filmed her 86 year old grandfather during the last seven years of his life in México and the United States. After returning to rural Mexico, her grandfather  quietly begins to build a house on the empty lot next to his home in rural mountainous Durango state for a son that has none.

One of the many things I liked about her film is that Iliana was able to capture the slow rhythm of life in rural Mexico, in once scene filming the wait for a fly to naturally pass in front of her grandfather, while he is in a conversation with his son Jorge at the kitchen table, the grandfather calmly waits with a fly swatter in his hand to rid the pest from the kitchen. And zap! he got it.

I wrote to her directly and she not only accepted my request for an interview but gave me a special invitation to watch the documentary on the campus of the University of Texas at the Latino Media Arts and Studies (L-MAS) a program of the Moody College of Communication at UT-Austin.

Iliana is an attractive young woman with beautiful black hair down to her waist, in a natural style. On our meeting, she greeted me with a sincere and warm smile. Iliana’s serene aura was instantly noted, her calm gaze, and unhurried voice. And an obvious infinite patience, because only a person with that sort of patience could wait seven years to finish filming this project. And judging by the critical response to her film and that of the audience here in Austin, the wait for her,was worth it.

Later in a zoom conversation Iliana Sosa was able to tell me a little more about her project.

Iliana, thank you very much for giving me your time for this interview. It is a pleasure to welcome you in La Revista Mujer. Could you tell me what inspired you to film your grandfather’s journey during the last seven years of his life?

First of all, thank you for the interview and it was nice to meet you at the presentation of my documentary at UT.  I started because I wanted to know more about my grandfather, because he was a bracero.

For almost twenty years he came by bus from El Paso, and I always wanted to get closer to him, but sometimes I didn’t understand him very well. I wanted to know and get to know him more and so that was the beginning of the project. I never imagined that I would finish this documentary.

How did you learn to make documentaries so young?

I didn’t know I was going to start so young, I’m 36 now! Well, I learned to make documentaries by making this documentary. Then I did it with my mom, and that’s how I started little by little. I didn’t film every year, obviously I had other work to do.

How many trips did it take you to make this project in total?

The first trip I made with my mom, in fact, she was my first producer. Of course I didn’t do it full time because I didn’t have the necessary funds.

Then I made about two trips by myself.  Later, I made three more trips, when I had funds and I had a cinematography team with me, among them Glenda Walls.

Yes, my uncle still lives there, by the way nobody lives in the new house. The house is as my grandfather left it, but Jorge lives there and sleeps in the same room he shared with my grandfather. My family, my aunts, still go to help him.

However, when I was filming the focus was on my grandfather. The relationship between the two of them, in their daily life, I left it at that point, just to do it in the future. I was looking forward to filming something with my uncle Jorge and filming it after my grandfather died, but the pandemic arrived and we didn’t do it.

I was struck by your grandfather’s stories about the hill of witches and the house with a hundred doors,was there a story like that that you decided not to include in the film?

Yes, we had many stories, (laughs), my grandfather was always full of stories and tales, and what is very magical about that place, is that desire to understand the afterlife. But we only put those two stories relevant to this documentary.

Bus trips in Mexico are very fantastic, have you often returned to San Juan del Río?

No, since my grandfather passed away we haven’t gone back. Then the pandemic started and we didn’t go anymore. But I am thinking that I would like to return to have a presentation of the documentary in town.

Has the town of San Juan del Río been affected by drugs?

We filmed in the state of Durango, but no, we weren’t afraid of being there, besides, we were always in the house or in town.

Did you do the narration for almost the entire film, did you hire voice actors, did anyone help you?

No, I did all the narration myself.

What do you think about the fact that this SXSW film festival has offered films in the amount of sixty percent by women filmmakers and you have been one of them? What do you feel when you see the work or meet other women filmmakers?

I’m very happy to be a part of this and also, it’s really nice to see that women are making more films. Not only documentaries, but cartoons, animation or cartoons, and feature films, I’ll just tell you this in English: “is about time”.

There are a lot of women making films, but they had not been celebrated as women of color, Latinas, Africans, etc. They are more inclusive. But it’s still a very difficult industry, there’s no access to funding, I don’t know, I feel like we’re missing a lot more,

Your documentary was mostly made by women, especially your editor, do you think editors sometimes influence or allow you to deviate a little bit from the original purpose of your documentary? For example, in this case, whether or not to use more beautiful landscapes of Mexico or to decide whether or not to have you in the film with your grandfather.

I love my editor and she helped me a lot, whether it was teamwork or collaboration. She helped me focus a lot – she asked me questions that I hadn’t asked myself.  For example about whether I was frustrated by the material, or how is this going to serve me in the story?

When I met her I had a very different idea of the film. Sometimes yes, I wanted to put more scenery and do other things, take another direction, but in this collaboration you have to learn to listen to other opinions. And from there you form your own.

In the documentary, the relationship with the editor-director is fundamental. When you are filming, sometimes you don’t know what you are going to get, but all the magic happens in the editing of the story.

What is your opinion about using film instead of digital?

Well, I love the way film looks using roll/tape film. But realistically, its cost is very expensive.  For documentaries it’s difficult, although there are people who have done it. I did that when I was in school, maybe in a feature film project.

Have you seen Les Blank’s documentary about the Rio Grande Valley and its music called Chulas Frontera? The use of film rolls, it wasn’t digital, and that’s why the color is very intense, abundant.

I do know the name, but I haven’t seen it.

As an assistant professor of Communication at UT, what do you to inspire other female directors?

Well I’m in the Radio, Film and Television department, I’m an adjunct professor. I love having students, particularly women and also people of color, I what I try to do is:

Try to push them to be open and vocal about their opinions. I think women are not very vocal. To try to be open and vocalize, and really explore their voice and try to show filmmakers that they’re not exposed to – like Tatiana Huezo’s work. or Charles Burnett’s films – 1960’s.

What would you advise other women who want to start filmmaking to study in college?

Because that’s where you can find their network of contacts that can help them in the future. But you yourselves can learn on Youtube. On your personal phone.

What is your favorite dish from Durango?

I have to confess that my cousin makes the most amazing chiles rellenos and  barbacoa tacos.

And now what’s next for you ?

I started in fiction, and moved to documentary, and now I want to start doing fiction freatures again and am working on some projects already.

Congratulations again to Iliana Sosa for her success in her first documentary and for paving the way for other women in the world of documentary filmmaking.